This project, my dissertation research, examined the origins and architecture of a Chaco-era great house called Aztec North, located at Aztec Ruins National Monument in northern New Mexico. While other sites at Aztec have been studied in great detail, Aztec North had never had any excavation before this project.

The Aztec community as a whole included at least three great houses and was built by Ancestral Puebloan people (not Aztecs!) between around 1100 and 1275 AD. Aztec was the largest known outlier of Chaco Canyon, a major center of sociopolitical activity. And after Chaco's decline around 1140 AD, Aztec very likely became a new power center in the region.

The three monumental great houses at Aztec are organized in an elaborate cultural landscape (Fig. 1), and part of the goal of the project was to understand how these structures relate chronologically to each other. Archaeologists have good evidence that the Aztec West great house, which park visitors can walk through today, was built mainly between 1110-1120 AD, and Aztec East was built after that, but Aztec North's date was uncertain. We also know that Chacoan builders were involved in construction at Aztec West (Fig. 2). This is partly because of the massive foundations that underlie the walls and the core-and-veneer walls which used shaped sandstone masonry “veneers” over a stone rubble core. Both of these features made the walls massive and strong, allowing multistory construction. Both features were technologies apparently developed in Chaco Canyon. They are considered “low-visibility features;” because they’re hidden in the final building, others would not be easily able to imitate them.

From the surface, Aztec North looked very different from Aztec West. In shape and size, it looked very much like other Chacoan great houses, but its walls seemed to have melted away and left little sandstone behind. Archaeologists assumed that it was built mainly of adobe.

Our 2016 excavation revealed surprises. Instead of the adobe structure we expected, the rooms we excavated had core and veneer walls, with Chaco-style coursed sandstone masonry. This suggests, at minimum, an effort to conform to Chacoan ideals. In addition, we uncovered the same kind of massive foundation trenches that are typical of Chacoan construction (Fig. 3). But the cores of the walls consist of adobe chunked in by the handful—a construction method that is definitely not typical of Chacoan structures (Fig. 4). So the great house’s construction seems to combine both Chacoan and local construction methods.

Radiocarbon dating of corncobs and other organic materials from the great house, combined with other lines of evidence such as the pottery we excavated and the architecture of the great house, confirms that Aztec North was the earliest of the three great houses. It was built sometime in the three or four decades before construction began at Aztec West, so near the end of the 11th century.

Having these dates for Aztec North makes it possible to more securely interpret the site. Despite the unusual architecture, other aspects of the great house look very much like what we would expect to find at a Chacoan great house. A large percentage of the pottery, for example, was imported from the Cibola and Chuska regions, a characteristic of Chaco. So despite the unusual architecture, Aztec North was soon fully integrated into the Chacoan world.

The architecture itself raises fascinating issues. Archaeologists have tended to see Chacoan masonry as evidence of social hierarchy, of powerful people able to mobilize the labor of others. But Aztec North’s adobe points more towards a community working together. Adobe construction does not require particular skill or strength, but everyone would have had to come together to lay all that adobe before the rains came. The combination of masonry and adobe points to a community transitioning from egalitarian labor regimes to a more hierarchical system.

This research at Aztec North suggests that archaeological models of Chacoan expansion have been too simplistic. While Chacoan-trained builders were clearly involved in construction at some outlier great houses, and other great houses were local imitations of Chacoan architecture, Aztec North was something in between. It was built by people who had not previously built a great house, but they were not completely lacking in Chacoan knowledge. Moreover, people here engaged in an audacious experiment in adobe construction, on an unprecedented scale.

In addition to these big picture questions about architecture, chronology, Chacoan relations and landscape, we have also learned important details about the artifacts people used here and the plants and animals that people relied on for subsistence at Aztec North. More soon!
​ 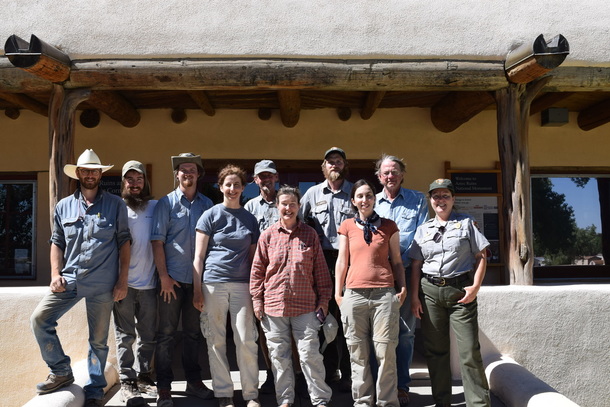 You can't visit our excavation site, but Aztec Ruins is a wonderful place to visit. Check out the park's website for directions and information!